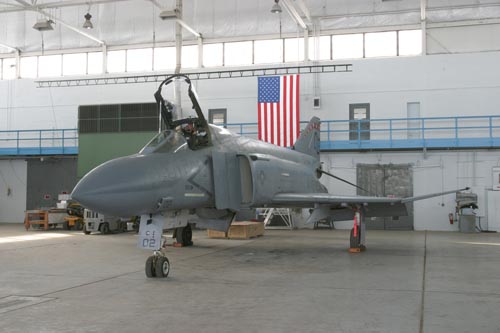 F-4S was the designation applied to 265 (some sources say 248) F-4Js which were upgraded in the mid-1970s. This program was analogous to the Bee Line project in which Navy F-4Bs were upgraded to F-4N standards. The major goal of the upgrade was to prolong the life of the F-4J so that it could remain in service until replaced by the F/A-18 Hornet in Marine Corps service and by the F-14 Tomcat in Navy service.

Major changes included airframe and undercarriage strengthening. The aircraft were stripped and carefully inspected, and where necessary they received landing gear and wing/fuselage structural improvements. Visible external straps were added to the wing spar to improve the structural integrity. The electrical system was completely rewired, and the hydraulic system was replumbed using stainless steel tubing.

In order to improve the maneuverability, two-position wing leading-edge maneuvering slats were fitted to the F-4S, which gave a 50 percent improvement in combat turning capability in comparison with an unslatted F-4J. These slats operated automatically as a function of angle of attack, but they could be overridden from the cockpit. The slats came in two sections, one on the outboard part of the fixed inner wing and the other on the folding outer wing panel. Because of delays, these slats were not initially fitted to the first 43 F-4Ss, but they were later retrofitted.

The F-4S was fitted with the digital AWG-10B weapons control system with new AN/ARC-159 dual UHF radios and an ARN-118 TACAN (but not to all F-4Ss). The ALQ-126 or 126A deceptive electronic countermeasures set of the F-4J was retained, with the same short intake antennae fairings. One way that the F-4S could be externally distinguished from the earlier F-4N was by the shorter upper intake fairings of the S.

One of the persistent problems with the Phantom was that it tended to leave a rather prominent trail of sooty black smoke behind it, making it more readily visible to an enemy. In order to correct this problem, the F-4S was fitted with smokeless J79-GE-10B engines with low smoke combustors and low-energy ignition. This same engine was also fitted to some F-4Js.

Low-voltage formation lights were fitted to the sides of the nose, mid-fuselage, and tailfin, and staggered cooling ports were fitted near the nose wheel well.

By the end of American involvement in the Southeast Asia War, the Phantom was already beginning to be supplemented by the Grumman F-14 Tomcat in deployable squadrons aboard the larger carriers. All throughout the remainder of the 1970s and into the early 1980s, the Navy progressively replaced its F-4Ss with later equipment in most deployable carrier-based squadrons. The exceptions were six squadrons which were assigned to the older and smaller USS Midway (CVA-41), Franklin D. Roosevelt (CVA-42), and *Coral Sea* (CVA-43), which were reequipped with F-4Ns and F-4Ss and soldiered on with these planes for a few more years. However, by 1986, all of the Phantoms serving with the Atlantic and Pacific Fleets were gone, the last carrier launch of an F-4S having taken place on March 24, 1986 when F-4Ss from VF-151 and VF-161 were launched from the USS Midway for the last time. No Phantoms served aboard Navy aircraft carriers after that time.

After 1986, F-4Ss served exclusively with shore-based Naval reserve units. However, this service was rather brief. The last F-4S was retired by VF-202 from NAS Dallas on May 14, 1987 (BuNol 155560), becoming the Navy’s last tactical Phantom II. VF-202 later reequipped with F-14A Tomcats. By mid-1992, the only Phantoms remaining in Navy service were those assigned to the Naval Air Warfare Center for operations from NAS China Lake and NAS Point Mugu in California.

In the late 1980s, Marine Corps units began to phase out its F-4Ss in favor of F/A-18As. In January of 1992, VMFA-112 retired the last F-4S from the US Sea Service inventory. They completed their transition to the F/A-18A shortly thereafter. This was the last Marine Corps unit to operate the Phantom, and was, incidentally, also the last naval aviation Phantom to serve on active duty, apart from drones.