This Skytrain changed hands numerous times, including, but not limited to the following: starting with the San Bernadino Air Material Center, Norton Army Air Field, California in July 1945; February 1946-555th AAF Base; October 1946-54th Reconnaissance (Long Range Weather) Squadron, where it was converted to a C-47D; dropped from the USAF inventory in October 1962 where it was picked up by the Moroccan Air Force.

After the Moroccan Air Force, the C-47D moved on to the private sector as it was purchased by Euroworld California, Inc. (later Vision Air International) in September 1978 and then acquired by the Military Aircraft Restoration Corporation (MARC) of Chino, California in May, 1984.

In September 1991, the aircraft moved to its present location at MAPS Air Museum for restoration, ending with D-Day colors under the name Ruptured Duck.  Currently maintained by Crew Chief Ron Duplain.

What is the nickname here?  The C-47, like many military aircraft, get an official nickname, but sometimes get a special one from the troops as well.  For the C-47, it is the Skytrain.  However, during WWII’s European theater, troops there called it the Gooneybird, while the British that operated theirs, called them a Dakota.  Variations had their names too, like the Spooky (see Armament section below) and the Skytrooper for the C-53 version which lacked a reinforced flooring and other features.

At MAPS Air Museum, you can to go inside the Skytrain to look around the cockpit and transport area.

Museum display note: Our C-47 is marked and painted with D-Day colors and with the nose art of “Ruptured Duck”. 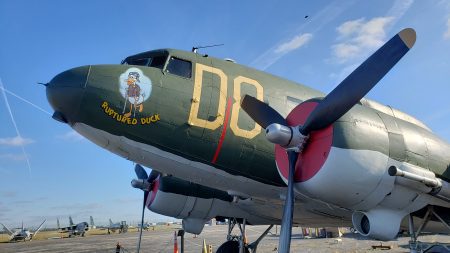 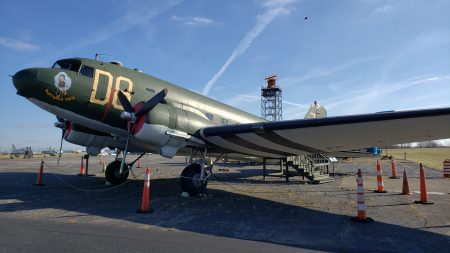 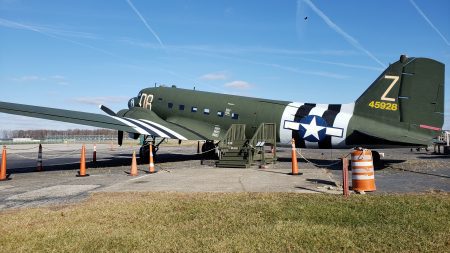 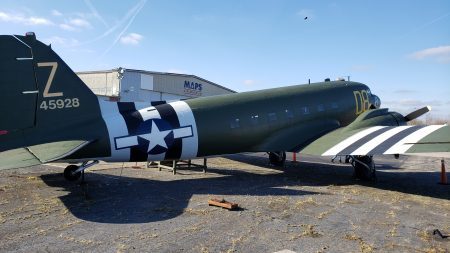