World War I was the first major conflict involving the large-scale use of aircraft. Tethered observation balloons had already been employed in several wars, and would be used extensively for artillery spotting. Germany employed Zeppelins for reconnaissance over the North Sea and Baltic and also for strategic bombing raids over Britain and the Eastern Front.

Aeroplanes were just coming into military use at the outset of the war. Initially, they were used mostly for reconnaissance. Pilots and engineers learned from experience, leading to the development of many specialized types, including fighters, bombers, and trench strafers.

Ace fighter pilots were portrayed as modern knights, and many became popular heroes. The war also saw the appointment of high-ranking officers to direct the belligerent nations’ air war efforts.

While the impact of aircraft on the course of the war was mainly tactical rather than strategic, most important being direct cooperation with ground forces (especially ranging and correcting artillery fire), the first steps in the strategic roles of aircraft in future wars were also foreshadowed.[1] 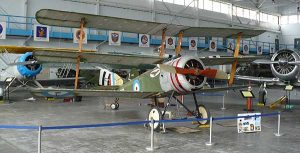