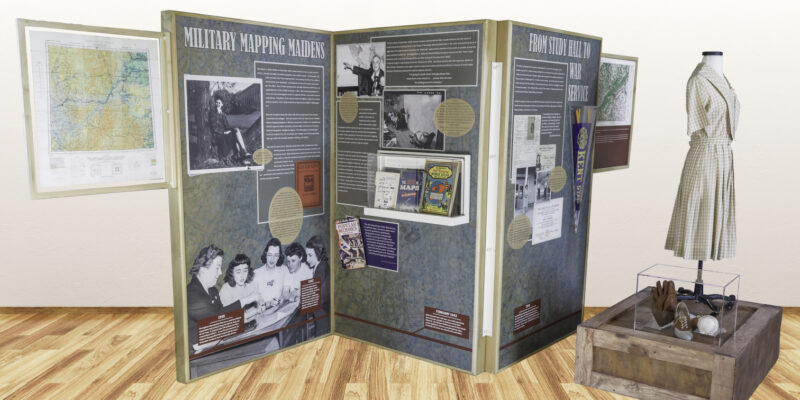 The MAPS Air Museum will open a temporary, traveling exhibit “Military Mapping Maidens,” starting Saturday, May 8, 2022 until Friday, August 5, 2022. This exhibit features the story of 224 young women who were recruited by the Army Map Service in 1943 to research and draw maps by hand for the Allied war effort in World War II. The exhibit is narrated through the personal experiences of Bea Shaheen McPherson, a Kent State University alum and resident of Hartville, Ohio, who was encouraged to take a 60-credit hour course in cartography. Completion of the course, designed by pioneering female
cartographer Edith Putnam Parker and taught at Kent State by Professor Edna Eisen, opened the door for McPherson to apply for civil service employment with the Army Map Service, an organization which today is the National Geospatial-Intelligence Agency, based in Springfield, Virginia. 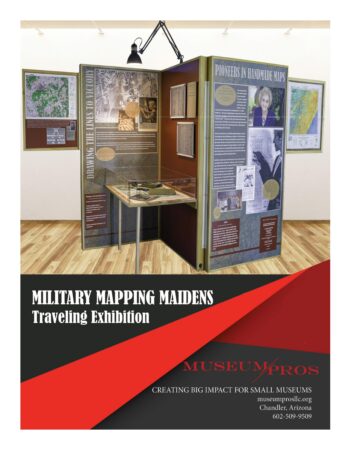 Young women recruited to fill mapmaking roles for the Army Map Service came from 22 colleges and universities where Parker’s cartography class was offered. Dubbed the Military Mapping Maidens, or 3M Girls, the mapmakers were housed first in temporary barracks-style housing in Arlington, Virginia, until civil service housing at McLean Gardens was completed. On workdays they commuted by trolley to the Ruth Building, a three-story brick structure covered in camouflage to conceal its top-secret purpose. There, 3M girls toiled up to 70 hours per week in mapping departments that included project drafting, foreign editing, and research.

Over the course of the war, the 3M girls assisted in creating more than 40,000 maps of all types. The young women who trained and served as Military Mapping Maidens made a profound impact on the map making industry and preserved the lives of soldiers and citizens across the globe through their dedication to accurate, hand-drawn mapping.

Here is Museum Pro Curator, Michelle Reid, on this exhibit: “Inspiration for this exhibit began when I met Bea Shaheen McPherson in January 2020. Her story of wartime service, personal sacrifice, and teamwork inspired me to share that story with the public in a meaningful and tangible way. Over the course of two years, our Museum Pros team met with Bea and her family, Dina Morelli Kennedy and her family, and others who helped round out the narrative and provide depth to a little-known part of World War II home front history. We partnered with the Alumni Office and Library at Kent State University, and with the Chief Historian at the National Geospatial-Intelligence Agency for background and context. The result is a dynamic display built to tell a big story in a small space.”