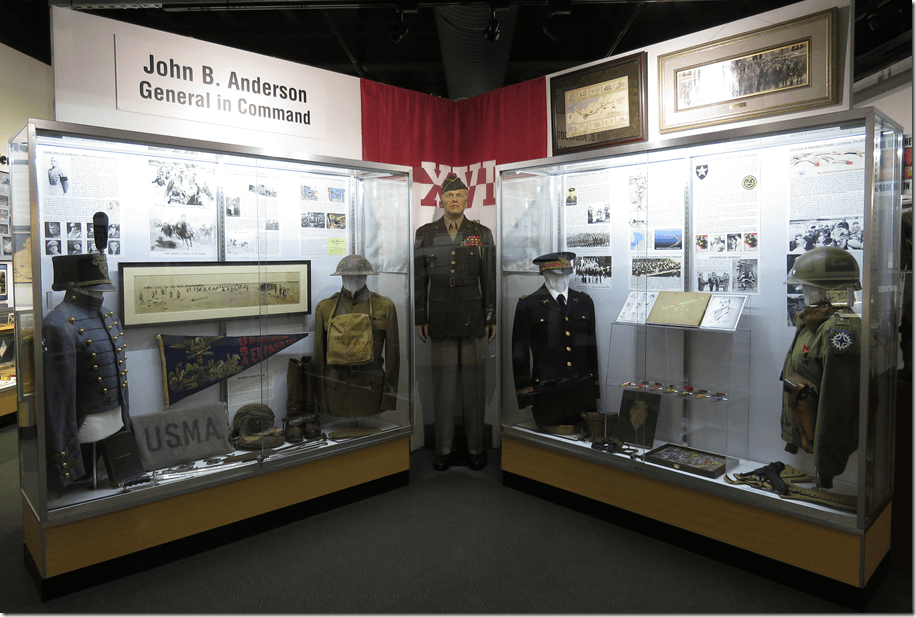 From Museum Displays, Gary Haught: The new Anderson display features a career soldier, who graduated from The United States Military Academy (West Point) in 1914 as a 2nd Lieutenant and who, during WWII, as a Major General, commanded the largest corps (XVI) in the European Theater of Operations (ETO), spearheaded Operation Plunder, the crossing of the Rhine River in March of 1945.
The display contains uniforms, medals, photos, artifacts and stories from General Anderson’s thirty-two year Army career. Some high points of that career include: serving with General Pershing as a member of the 6th Field Artillery during the Mexican Intervention in 1914-1917, duty in WWI with the 1st Division (the Big Red One) 1917-1918 as an artillery officer whose Battery C, 6th Field Artillery, fired the first United States cannon shot of WWI. During the inter-war years, he was a member of the U.S. delegation to the 1929 Geneva Convention, which established the protocol for treatment of prisoners of war. In September of 1942, he was named commanding officer of the newly formed 102nd Infantry Division and was responsible for the training of its 15,000 men prior to combat.
Also available in the MAPS gift shop is the newly published biography – General In Command, written by Dr. Michael Van Ness, General Anderson’s grandson.
Share